Volunteer of the Year (deadline for applications – March 30)

Living with Parkinsons: Is There an App for That? Webinar – September 20

We asked you to join the movement – The 1,000,000 Step Challenge – and you did! Every step counts in the fight against Parkinson’s, so we counted every single step you took.  With over 1,400 walkers participating, 4,612,734 steps were taken!  We encourage you to continue the momentum by setting a daily step goal and using your pedometer to help you reach it.

Thanks to all the WALK-IT for Parkinson’s walkers, volunteers, donors and sponsors for all your support in helping to raise over $332,000 … and counting!  Your support means that Parkinson Society Southwestern Ontario can invest funds in vital Parkinson’s programs and research to help improve the quality of life for people living with Parkinson’s in our community.

Thank you to all our sponsors, participants, donors and volunteers for making the 2016 Spring/Summer events a success!

Click here to see pictures from the spring/summer events in our NEW GALLERY.

Please make sure to support our supporters:

Be part of the excitement – get involved in WALK-IT for Parkinson’s this September!

When?
This September 10th, 11th and 18th our inaugural WALK-IT for Parkinson’s will take place in 13 locations throughout Southwestern Ontario.

Why?
Regular physical activity can help slow the progression of Parkinson’s symptoms, so let’s help the Parkinson community in Southwestern Ontario keep active. Join the movement and take the 1,000,000 Step Challenge by participating in WALK-IT for Parkinson’s.

Get involved and accept the challenge by registering as a walker, becoming a team captain, joining a team, pledging a walker, volunteering at your local walk or making a donation. Join the movement for physical activity and be a part of WALK-IT for Parkinson’s this September!

For information on times and walk locations, go to www.walk-it.ca.

We appreciate your continued support. With your assistance and our focus on the delivery of local programs and services, we will service a larger number of people living with Parkinson’s, their families and caregivers in Southwestern Ontario.

Thank you to everyone that participated in our walk last September!

Just 13-and-a-half minutes long. But since the documentary The Voice was posted online this past weekend, it’s already having a big impact.  It has been shared on social media hundreds of times.

The film chronicles the before-and-after story of former CBC Radio host Andy Barrie. He sat behind the microphone at Toronto’s Metro Morning radio show for nearly 15 years.  Barrie retired in 2010 after being diagnosed with Parkinson’s Disease.

Carol Off invited Barrie and filmmaker Lana Šlezić into the As It Happens studio to discuss the film and his life with Parkinson’s.

“Andy, to see you in wearing headphones, in a studio behind a mic, that is a wondrous thing,” Carol says to open the interview.

As a life-long communicator, Barrie says one of the most difficult aspects of Parkinson’s early on was losing confidence in his ability to connect with people.

“Neuromuscular disease effects all the muscles in the body, including the muscles in the face. And I didn’t feel like I could communicate any longer with my face; letting someone know that I believe them or don’t believe them, I couldn’t do that anymore. People would just see this rigid face. And that was very confusing to me, having depended so long on that mode of communication.”

Barrie says he withdrew. He also lost his wife and his brother. He moved out of Toronto, into a farmhouse north of the city where he lived alone.

And then he decided to undergo a pioneering treatment called Deep Brain Stimulation or DBS. It has improved the lives of many people with Parkinson’s. And it changed Barrie’s life.

“It suppressed most of the Parkinson’s symptoms. My face would relax, my arms would relax. The tremor would stop. I’d stop doing all the gesticulating.” 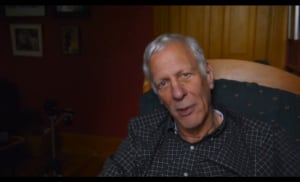 A screengrab from The Voice, a documentary about former CBC Radio host Andy Barrie.

Šlezić’s documentary chronicles Mr. Barrie’s life before and after the treatment. One of the most moving moments was when he went to visit his daughter in New Mexico after she had a child. At first, Mr. Barrie was reluctant to have the filmmaker tag along, but it turned out to be very important.

“As it turned out, my daughter was very worried but she hadn’t raised it with me. She was worried about my Parkinson’s if I was carrying the baby, maybe I’d stumble, drop the baby on the floor. It’s not a small thing. And she was weeping when she told Lana that.”

In the end, Mr. Barrie is able to hold his grandchild.

You can watch Ms. Šlezić’s documentary, The Voice, here.

When Keith Goobie was diagnosed with Parkinson’s disease (PD), he and his partner Roslyn Patrick did their homework to arm themselves with as much knowledge as possible about the movement disorder illness that they knew would increasingly become a challenge for Goobie.

The former IT manager had already experienced some stiffness and a tremor, but at work one day he was also struck with a “brain freeze” during which he found himself zoning out for two or three seconds at a time.
Because one of PD’s prime symptoms is a slowness of movement, the hands, legs, voice and face are often slowed and there is less spontaneity expressed – even in the face or the eyes.

“I found that even if I were quite interested in what someone was saying, my face would tell a different story because it showed no response,” says Goobie, who was diagnosed 18 months ago in his early 50s. “But that type of information was not talked about by my doctors. It was all about the shakes.”

“Essentially, the stereotype of PD is that it’s all about movement,” says Dr. Ron Postuma, a neurologist with the McGill University Health Centre in Montreal. “Although that’s true, the degenerative process occurs in many areas of the brain and in many ways. So although patients are aware of the motor aspects of the disease, they are not as aware of the non-motor symptoms or they don’t bring them up with their doctors because they don’t think they are related to PD.”

“These symptoms include the kind of brain freeze that Goobie noticed. But they may also include constipation, insomnia, loss of smell, nausea, restless leg syndrome, excessive sweating or build-up of saliva, cognitive impairment, and feeling light-headed when standing up. These non-motor symptoms are not experienced by every PD patient, but if and when they are, they often go unrecognized and untreated,” explains Postuma, who co-authored a free 50-page booklet on the subject.

This handbook, A Guide to the Non-Motor Symptoms of Parkinson’s Disease, is a joint project of Parkinson Society Canada and the Canadian Institutes of Health Research and is the first of its kind possibly in the world. It can be easily downloaded and includes a questionnaire checklist so people with PD can track what they are experiencing and take those notes with them the next time they visit their doctor.

“Many of the symptoms are only recently described,” says Postuma, who explained that much more is known now about PD.

“Now that the motor symptoms are better controlled, we see these other non-motor symptoms of which patients were not previously aware because they were so disabled from their motor symptoms. Also, patients today are living longer and better and as a result have been able to notice these things.”

Because non-motor symptoms have recently come to light, not every doctor would be aware of them. “To some doctors educated even 20 years ago, it was just the shaking disease. You need someone with a holistic view of the disease,” says Goobie, adding that the Parkinson Society has a list of recommended physicians. Tracking non-motor symptoms is important because today there are treatments available to help with almost every one of them.

“With PD a degenerative and progressive illness, so much is out of one’s control,” says Goobie’s partner Roslyn. “This booklet allows those experiencing issues with the non-motor aspects to have foresight. It alleviates additional stressors of having the symptoms either totally disregarded or marginalized.”

A Guide to Non-Motor Symptoms of Parkison’s Disease

Thanks for signing up!